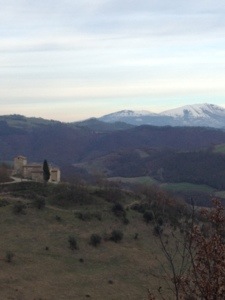 A short walk in the quiet white roads of the valley with the dogs, dreamily minding my own business and enjoying the view when a white car pulled up and two well dressed guys with polished shoes got our.
ASL sticker on the side of the car, they explained they were out controlling dogs’ microchips!
Well both Jenny and Milo have their chips – they needed them for their passports to travel to italy. Jenny’s took a bit of time to find it must have migrated through the years
All ok both passed, but it has left me thinking how odd… Never had I imagined I would ever be walking dogs and have a microchip control. Which got me thinking will human microchips be next?
Posted from my iPhone without glasses e&oe

Hey, I have no idea what either product is, all I know is that on checking my computer somebody calling himself Jack Spratt – a likely name methinks, kindly offered me inordinate quantities of these products by email this afternoon.  The joys of junk mail.

Over the past few days I have once again been hit by a major dose of the ‘flu.  This time it took me real bad and this is the first day I have been able to comfortably read a computer screen.  Facebook and blog have both been ignored, my plans to get online an online booking form on the website have been delayed, Everything ached!  There is so much of this ‘flu going that many of you already know just how ‘orrible it is, so I won’t let this turn into a rant or feel sorry for Alec.

Anyway I have struggled to answer emails.  Enquiries and bookings are coming in for this year, and I am conscious that I must reply swiftly to them, so have squinted at the screen and replied.  Frankly being almost unable to open my eyes, and focus let alone read, it has not been easy over the past few days, but I managed it.  In the interim, the radio, notably streaming BBC dramas and a stream of phonecalls from my neighbours and friends offering support, to do my shopping, to take me to the doctors, the hospital and just to check if I am alive have been my companions. Daniella has just left, she was over to pick up a document and brought me a super moist home-made chocolate cake, bliss on an empty stomach, and not having eaten for days I can for once gorge without putting on weight!

Yes, the fixed line does ring but inevitably the calls are from gas or electric companies offering me a new contract, that I do not want, and will not even consider, Internet companies that try to fool me into believing using the only form of technology available here they can dramatically improve my connection speeds. or a marketing executive trying to sign up accommodation businesses for an accommodation website linked to a rather too oft spoken about budget airline…. By the time of this call I lost the plot, politely informing the caller that the owner was on indefinite holiday and I firmly believed even on ‘her’ return would not be remotely interested in advertising and ‘she’ hates the airline!  Now that was all done on my part calmly and to much satisfaction.

Anyway on a positive note I am off to BRUSSELS on Wednesday.  ENIT, the Italian tourist board are hosting a meeting for tour operators and buyers in conjunction with the Brussels holiday fair, and having circulated an offer to attend, it seemed to me to be too good an opportunity to miss, so I booked up a swish hotel and am preserving my strength, sorting out publicity material and preparing to go.

A direct flight from our local airport of Perugia, now aptly renamed San Francesco di Assisi takes me in just under two hours to Brussels, a city to my shame I have yet to visit.  I have also had many guests from Belgium and Brussels area so the trip maybe a chance to meet up, who knows it would be real nice.

Ok, it is a chilly evening and I am lazing in my favourite armchair in front of the fire at Bellaugello Gay Guest House watching Shortbus on dvd.

Until a few months ago I had never heard of Shortbus, however it was mentioned at dinner one evening and so I decided it sounded great and that it was about time I caught up with the present day and so before Christmas I sent off an order for a whole host of new DVDs to Amazon.  Let’s face it for the guys who know my DVD collection was pretty poor and outdated, now there are some splendid international titles for the guys to watch whilst on holiday here at Bellaugello.

However back to the gist of this post.  I was engrossed with the story but increasingly aware of a persistent drip drip drip somewhere near my left ear.  Incredibly lethargically I chucked the dog off my lap – yes, I know he is not allowed on the furniture but it was a miserable evening and he is old and  in need of cuddles and so off I went to investigate the source of the persistent drip.  The ceiling in my sitting room is cotto tiles and wooden beams and sure enough one of the cotto tiles was wet and water was dripping onto the back of my armchair and the floor….  oh no!!

Now it was too late to go exploring outside, also too d… cold and wet and the film was so good,  so I moved the chair and put a bucket to catch the drips and poured myself a whisky and sat back down to the film with the additional soundtrack.

The next morning, breezy but dry I decided to climb onto the roof and effect repairs.  Now I KNOW I SHOULDN”T, but would you want to live with a leaky roof? I guess not, so I hauled the ladder out from its storage place at the furthest point of the property and leant it up against the roof and climbed.  I had measured from below just precisely where the water was coming through so I clambered over the cotto roof tiles and went in search of the hole.

I soon saw two broken coppi and carefully moved the others to the side and yanked the offending bits out.  A perusal of the roof showed that I really should replace a further dozen or so.  So I headed back toward the ladder when a sudden squall blew and lo and behold blew the ladder onto the floor…. oh no!!

I was now on the roof – alone – no telephone – dogs shut in the house – deserted road, and the wind was picking up and it was starting to drizzle.  Not a good situation to be in.  I had visions of being discovered in some future time a mere shriveled skeleton…

No, I just cannot do that so what to do?  Not my thought, but suggested as an option to me last night by friends who came for dinner, undress, tie all my clothes together and make a rope to climb down.  Yeah right! can you imagine in this cold that would have been the one moment when the dear old lady walks past!!!  I had been more inventive, (I am a sun worshipper not arctic cold worshipper) rather I got my steel measuring tape, extended it and made a loop, caught the foot of the ladder and slowly dragged it back into the vertical position. I felt good about that.

Gingerly I climbed down, then found an incredibly heavy flower tub to lodge at the base of the ladder and tied the top end to a beam protruding from the house, now I felt more secure.  Over to the hay shed for a supply of coppi, carefully back up the ladder carrying the tiles, and then I placed them.  But what to do with the old broken ones?  There were now more as walking over the tiles inevitably some more broke.  Do I carry them down or stand at the edge of the roof and chuck them into the wheelbarrow below.  The latter choice seemed somewhat foolhardy, the wind was still gusting, but meant less scrabbling onto and off ladders so it was the route I chose.

Result- Roof repaired, no drips, lots of broken bits of terracotta for putting in the base of the flowerpots as drainage and a kind of smug satisfaction that I had achieved all that with only minor mishap and a bit of ingenuity and the now thought of the first of the new seasons’ guests might have discovered me naked on the roof!

We have guys from the cruise booked for some days of relax here at Bellaugello Gay Guesthouse after disembarkation in Rome 3 Sept. 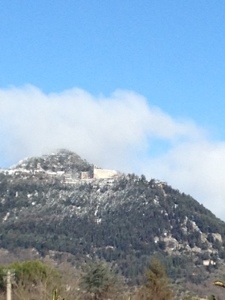