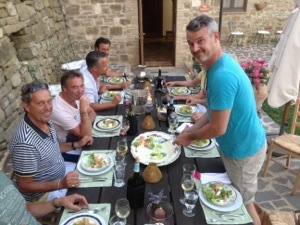 After a hot hot day poolside dinner at Bellaugello Gay Guest House was served on the terrace. One of our regular guests, and the only one really permitted into the kitchen made a delicious starter of mozzarella di bufala, local prosciutto, figs from our tree here at Bellaugello and placed on a bed of crispy salad, all liberally coated with the yummiest dressing. He is seen here serving his dish It was a fun evening, as always here, guys from different countries each with a story to tell. Today one couple celebrating 11 years together, tomorrow another 23 years together, and also another guy celebrating his birthday, all real causes for celebrations and a candlelit supper Hyacinth Bucket would have been proud to have hosted for Sheridan and his friends!! Shame the plates are Royal Worcester and Weimar not the best Royal Doulton haha! 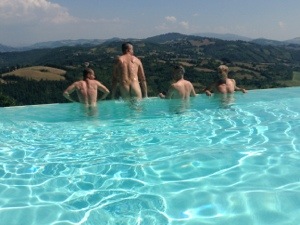 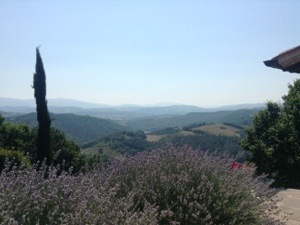 A glorious hot summer day at Bellaugello Gay Guest House
The guys are relaxing at the side of our infinity pool, the bees busy collecting nectar from the headily scented lavender bushes, and the cicadas are in full song. Life in Umbria is good! Relax, chill, enjoy…. All can be had at Bellaugello

Milo, my English Setter passed away this morning.  He had battled ill health bravely, right to the end when he became slower and slower until he just stopped.

Such a character, craving affection which he gave in abundance, his head happy to be cradled on a lap, nuzzling into you, big brown eyes showing pleasure and warmth.  He was a creature of habit, each morning leaving the house at Bellaugello to walk determinedly up the road to the neighbours to say hello to his girlfriend ‘Nuovola”, the friendship was platonic, they just rubbed noses and sniffed a bit, then he came home.  He was adoring of the kitchen door, always on the lookout after dinner for a left-over scrap, and bed time, a great nester, he could move a pair of shoes, a t shirt casually thrown on the floor, or a towel for ages, round and round, paws, nose, paws in circles, then once satisfied he would toddle off to bed in the other room.  An adorer of midnight snacks, and moonlit walks, on many occasions barking to be let back in at 2am!  A real character, and part my life and that of Bellaugello Gay Guest House that will be sorely missed. 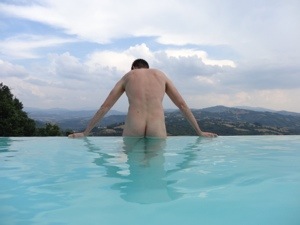 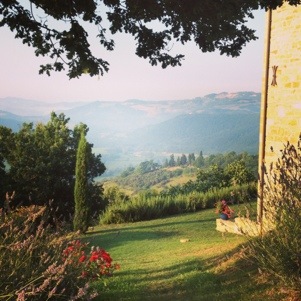 It’s going to be another beautiful day here at Bellaugello Gay Guest House in sunny Umbria Italy. The must is slowly rising and leaving the valley, it is already hot, birdsong punctuates the still morning air. A fabulous convivial evening yesterday, we all chatted until late, this morning I was the only one up with the lark and a camera!
Guests here all have fabulous cameras and have been taking loads of wonderful photos including the first of a new set for a variation on the “Bellaugello Backs” series, but to see them and to be included in the new series you will have to visit. They will only be displayed at Bellaugello 😉