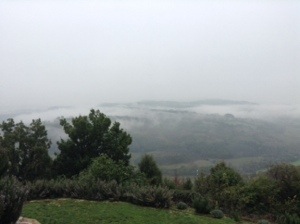 This morning it is magically quiet here at Bellaugello Gay Guest House.
Yesterday evening we lit the sauna stove and sweated for a couple of hours. Delightfully as we ran to the shower fed by refreshing spring water it was also warm outside, as one guy remarked how pleasant it was to be able to stand naked on the terrace at the end of October.
This morning it is a morning for staying in bed, there is no noise, all is still and even the countryside seems loathe to shed itself of its bedclothes… 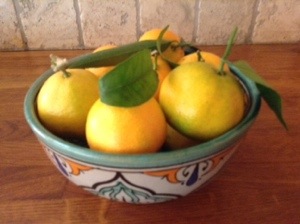 Autumn has arrived here at Bellaugello Gay Guest House, in Umbria. The leaves are turning to golds, reds and ambers, and the air has that magical slightly misty quality only found in the fall. Yesterday at the market in Gubbio the stalls were overflowing with new season citrus fruits, so scrumptious I thought I had better take a photo before we eat them all! I have blogged less of late, and am feeling guilty about it.  I could blame the slowdown on my output on the launch yesterday of new Apple products – yes, as always for some time prior to a new product launch my computer slows exponentially, and so I am less inclined to sit in front of the computer and rattle away at the unresponsive keyboard aimlessly watching the little rainbow ball or the little blue ball spinning endlessly as the computer decides whether or not to grace me with a bit of activity.

Not that I have been idling away my time, it has been a busy period here at Bellaugello Gay Guest House.  Like the sunshine, we still have guests, travellers who chose to come to Umbria when the area is quieter, to be able to wander deserted country lanes, to visit local wineries, most of whom are currently harvesting their grapes, enjoy the heat of our sauna and icy chill of the outdoor shower, and of course to visit Perugia for Eurochocolate, the chocaholic hedonist festival.

In the meantime I have been tidying in the garden including making a start on pruning the lavender bushes.  As most of you will know I adore lavender and the garden at Bellaugello Gay Bed and Breakfast is full of the plants.  Summers here are remarkable, the scent of lavender pervades every corner of the garden, the purple and violet flower heads swaying in the breeze releasing their heady perfume. And of course, we also cook with lavender, but now in the autumn is the time to prune the plants back, and every year there are more and more and not only is it back-breaking work but it is mightily  disillusioning (I think I have just invented that word although the dreaded auto spell-corrector says not) as there is an endless number of stalks to be cut, and deadwood to be removed..  A friend came over and got busy with the chain-saw lopping dead branches off the cherry trees, still more of them to be done, and as for leaves, well they have only just begun to litter the garden.  It is at times like these that I delight in my toys, all the gadgets that I have for garden work, and especially this year my large blower/sucker absolutely awesome for getting the leaves where I want them.

And we have made a start on the vegetable garden.  After years of neglect, or better explained as lack of time to do anything with it, we have decided it’s time to make a start.  Having planted tomatoes and zucchini in a border on the way to the swimming pool, and delighted in using them for our regular dinners here at Bellaugello, and picking bowlfulls for guests to eat when they prepare meals for themselves in the kitchen in the suites, and although we have a great supply of fresh vegetables from both Daniela’s garden and Monica’s father’s it seemed like time to get big with our vegetable garden. We have cleared away the worst of the weeds, and are now about to start digging the ground over, replacing the wonky fence, so that we have well prepared earth for next year.  This is a big job, the vegetable garden is on a lower terrace below the house, it faces due south so gets a good amount of sun and of course there is a water supply.  The soil is poor and heavy, back-breakingly so, and because of its position we are unable to get a machine in so there is no alternative but to dig by hand.  Still, next year, us and the guys will be picking salad leaves, tomatoes, zucchini and beans and digging potatoes from the Bellaugello garden.

Any guys wanting a break from their desks you are welcome to come over for a short break and help in the garden, let’s do it on a ‘wwoofer’ basis, in return for board and lodgings you help me in the garden. drop me an email. btw when it is just me I eat simply and work spasmodically!

So then there is the administration, sheaves of paperwork to the accountant and reams of email in reply.  Fire extinguishers were checked, they sent a new guy who managed to take every conceivable wrong turning, knock on every door and telephone me every two minutes for directions, and there’s me thinking ‘we’ve got signs on the road, use them’  Oh! and whilst on the subject the road has been patched up! the commune flatbed teetered down the hill, preceded by a Fiat Panda, driver busy on the cell phone, and two guys on the lorry, one driving the other with a shovel, tipping asphalt into the holes and patting it down with the shovel, just in time for the hunters to rip it all out again as they rush to and fro in their scruffy four wheel drives scouring the countryside for poor defenseless animals, such is the winter pursuit of the locals here in Umbria, Italy.

Anyway I digress, back to the subject, extinguishers recharged, it seemed like a good time to firm up on the marketing plan for next year, quotes obtained, and budget almost allocated.  I had hoped to include a trip to the the World Travel Market in London early next month.  The province was offering the opportunity to stand on their section of the ENIT – Italian state tourist board stand, but after several emails I discover they want €500 just a little excessive for little ol’ me! so reluctantly I declined their offer, and instead I guess if Brussels is anything to go by anyone seeking information from the Umbria stand had jolly well better speak Italian, ‘cos that is all the  local representative spoke there.

This is turning into a rant, but I won’t let it become one, so back to more positive things.  I have been looking through some of the many wonderful photographs that have been sent to me by guys who stayed here at Bellaugello Gay Hotel this year, they are all so fabulous and it is such a hard decision to make to choose those for the new website.  I am thinking of a calendar of my Bellaugello Backs series, but how to choose which pic?  Any thoughts guys, would you like to be in a Bellaugello Calendar?  Jenny, my wee dog had another small operation at the vets.  Almost as soon as she came home, stone in mouth as ever, she was running around as if nothing had happened, a great relief.  Back to the office I have been so pleasantly surprised by the number of bookings already confirmed for next year, some suites have only limited availability for the  height of the summer, it is so rewarding, especially as some bookings are from guys who have already been guests here, and some from guys recommended by previous guests, it is a real warm feeling.

And talking of warm, next summer, plans are now formed for a romantic dreamy large four poster bed to be sited at the far end of the swimming pool, a place for quiet relaxation, cosy cuddles and starry nights, curtains blowing softly in the breeze…..  Also progressing well are the plans for a new loggia on the east side of the house, just as you come out of the dining room, a simple vine covered pergola, the wisteria is already well established, and roses, vines and possibly kiwi fruit to be added each growing through one another making a fragrant and colourful melange over a shady seating lounge area, another place for an aperitivo, or just a cosy chat or snooze…  and finally following my recent trip to Alto Adige I have sourced a fabulous new line of bathroom products, gorgeous ecological gels and shampoos, with a novel presentation, to discover which, like the outdoor four poster bed and new lounge area you will just have to book into Bellaugello. 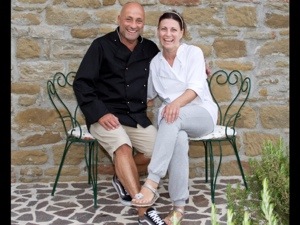 On a fine but slightly overcast autumnal day here in Umbria a sunny pic! Many thanks to Antonio for permission to use his great photo of Monica and myself – the two cooks at Bellaugello Gay Guest House this summer 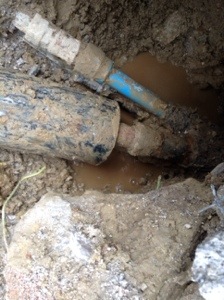 It is raining, the wind is blowing and today we have had to dig a hole right outside the dining room door as we have a leak here at Bellaugello Gay Guest House.
The leak is in a heating tube that runs from our wood and pellet fired boiler town through the garden to the lower part of the house. We dug this morning and discovered that the plumber had done a real stupid thing and finished the insulated tube short of the house – not only is there a leak, but the insulated tube stops short of the house, and so the super expensive super insulated non-heat-loss tube is worthless, we are heating the ground around the house! So now I wait on my new plumber who is coming to look at the leak. Of course it is not simple, the water is running from between the outer and inner casing, our hope is that he break is near the lower end otherwise it will mean digging up 30 metres of tube all of which run under established gardens, steps, flower beds and terraces…..
update tomorrow! 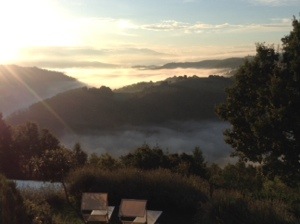