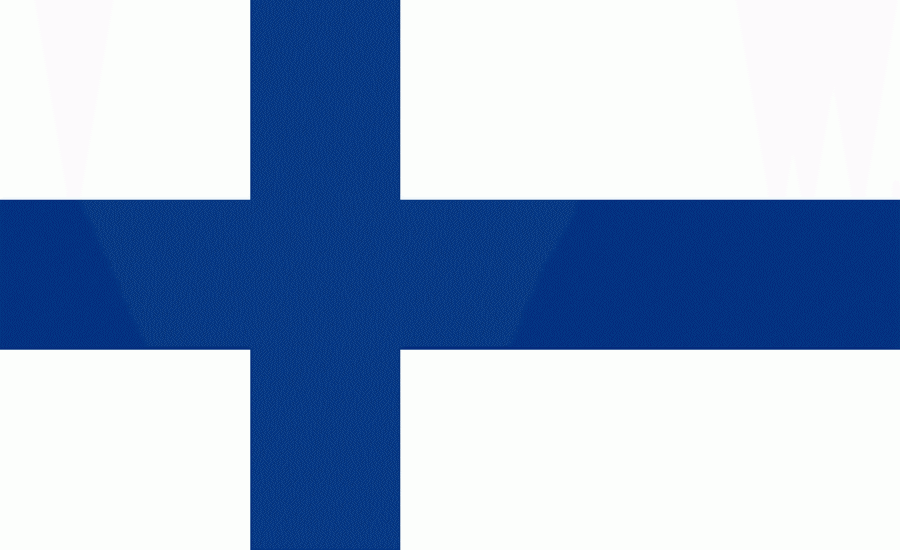 An excellent reason to break open the Finlandia…
Celebrate with us!!
Looking forward to welcoming the first couple of newlywed husbands from Finland for their honeymoon at Bellaugello.

Are you to be that couple of guys? Celebrate here at Bellaugello stay seven nights or more and let us give you 20% discount on our accommodation rates. Book by email to: book@bellaugello.com.

For the discount: Use the promotional code “kip-piss” at the time of booking and be sure to bring along your marriage certificate to verify your claim. It needs to be a same sex Finnish wedding, and you must send us a photo of yourselves at your wedding which we may use on Alec’s blog. Book by 31/12/2014. Holiday dates valid throughout our 2015 season excluding new year. For Brokerart the company who offer NO service I am so angry.  No time now to explain, but my blood is boiling on two accounts, there is a HUGE rant on the way…

Here is a taste of the other of my issues:

15 hours remaining… I could walk the files to Barcelona and have lunch and a hot steamy fun time and be back in Umbria at Bellaugello Gay Guest House before the files transferred !

Snapped from the top of the road in Valdichiascio looking south over the estate of Bellaugello Gay Guest House, Umbria, central Italy. 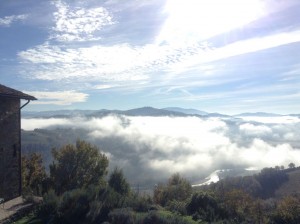 Buongiorno! from Bellaugello Gay Guest House in Umbria, Italy where the sun is shining so brightly, it’s a stonkingly beautiful day… Be it leaves that need raking, the Chiascio river in the valley below still full after the recent storms, the earth that requires shifting, or doors that have to be varnished, every task on my agenda had the same colour, all be it different shades, today was a day of browns.

After the rains of two days ago the ground is well and truly sodden.  I guess we have all seen the horrendous flooding in Genova and around the Como / Lugano area, well, somebody decided that Umbria was missing out, and so sent the rains this way too.  A huge thunderstorm, valkyries flying, lightning, so dramatic, and with all the hullabaloo a significant amount of water.  So today, in the weak but warm sunshine, I had to prioritise my tasks.

The doors won out.  I had the sandpaper, and wire brush, I had even started the job at the end of last week, and now the doors would be dry enough for me to continue.  So out I trotted and spent an entire day rubbing, smoothing, de-dusting and cleaning before giving the outside doors and windows their first coat of waterproofing.  The doors here at Bellaugello are solid wood, heavy, real heavy, and beautifully made, but the wood preservative does tend to disappear in the high heat of the Italian summer.  Worst affected are the south facing windows and doors, and they were not looking too clever, time for the maintenance man.

Bobby decided to keep me company, curled up at my feet, moving with me from window to window in the sunshine.  A break for lunch, a warming bowl of home made soup full of vegetables, the last from our ‘orto’ here at Bellaugello and some from neighbours gardens, a liberal dousing of parmesan, together with homemade wholemeal bread, a great nourishing workies lunch.

Now it is dark, the tools put away, dogs walked, and I am drinking one of the last cups of my Marks and Spencer Earl Grey tea, yes, another brown, and this time a dwindling supply which sadly will not survive until Christmas.

This evening, a phone call, it seems we are off to the thermal springs in San Casciano, Pizza first in our local town of Gubbio, then drive through to Tuscany, it will be so good to relax in the hot sulphorous waters under the inky black sky, I adore the ancient Roman baths at San Casciano, this will be the first time I have been this autumn, and I cannot wait, enough browns for one day, time for some indulgence! 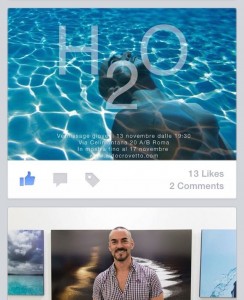 With things at Bellaugello Gay Guest House being rather quiet at the moment I am able to take time out to socialise and catch up with friends and colleagues who all too frequently I do not get to see during the busy summer months.

So it was that I headed off to Rome to view an exhibition of photographs by one of my guests.  Aldo is a brilliant photographer and was holding a small exhibition of his works with the theme of “Water”.  This is a follow up to his very successful exhibition held this summer. Not only was the main poster photo shot in the swimming pool at Bellaugello Gay Guest House, but there was a superb panorama of the Bellaugello Infinity Pool looking south to the distant hills, the sky heavy with grey clouds, that really gave the impression of not being in Umbria but rather being on a sail boat on the Pacific ocean, indeed Aldo tells me that several people had thought it so.  You catch a glimpse of it in the poster above. The exhibition runs until tomorrow and if by any small chance you find yourselves in Rome then do head over there.  The Photos are in very limited editions, maximum four prints and are really special.

Rome was resplendent in the sunshine.

I did my touristy bit including watching the cutest sexiest actor on film set just by the Foro, and then I met up with friends and, stayed over at my good friend Claudio’s super luxurious bed and breakfast; Resort Cavour.  Anyone looking for a great place to stay right in the heart of Rome I can thoroughly recommend it.  A chic apartment in a beautiful building on the road running from Termini station to the Colosseum and Claudio is a great host.  At the moment there are huge amounts of stairs to reach its lofty heights but Claudio tells me that finally the troublesome neighbour has passed on and they can finally put an elevator in (and will be doing so as soon as possible) that will whisk you right to the apartment.  Here is link to his site: RESORT CAVOUR – ROMA

On the train back to Perugia a phone call.  My builder Giovanni…  Hmm why?  Not that I have any building work going on at the moment and nothing planned until into the new year when I have a few new projects in mind including something most inviting…  I was surprised to have a call from him.  Giovanni has played a huge part of the reconstruction of the house at Bellaugello, including works around the wonderful infinity pool, so has become a friend.  Thus it was that he was calling me up to invite me to a celebration last night.  His daughter Beatrice was born in September and the phone call was to invite me to join in celebrating her christening.   So last night I dug out a tie, ironed a shirt, put in cufflinks and a smart pair of tarts trotters and headed over to a friends house – they were invited also and together in the pouring rain with our best friend we set off to the ‘Dolce Vita’ restaurant.

Contrary to my expectations it was not a huge party, there were less than forty guests and four of us involved in running hospitality businesses were the only non-Moldavian or Romanian guests, it was a real honour.   None of us was certain what to expect, and as the evening progressed all was revealed.   A singer flown over from Moldavia (ok he does live in Italy, but only returned the day before yesterday) sang in Romanian, Russian and Italian, and sang through the evening almost non-stop.  A groaning antipasto table was followed with the offering of presents.  Now us ‘foreigners’ had clubbed together and between us bought a gold charm bracelet – we thought that appropriate, something that as Beatrice grows can be added to.  But we were mortified when the god parents walked to the table and started presenting their presents which included blankets, rugs, romper suites, dresses, coats shoes, and the cutest little socks and a huge ginormous teddy bear that must be all of two metres tall!  The next guests walked to the table, yet more clothes – the stores in Perugia must now be empty, boxes and more boxes were presented and thankfully some small expensive looking bags, we were saved!  Once the presents were presented the god parents and close family took the blanket between them and put baby Beatrice in the centre and then under the anxious gaze of her father Beatrice was tossed up and down..

The baby safely restored to the arms of her mother the feast began, Italian and Moldavian dishes, Italian wines, Moldavian brandy, and lots of it.  Finally at 2am the cake was brought out….

Rather like an Italian wedding it turned into a huge celebration… We were made to feel so very welcome.  There was dancing, some of the music very reminiscent of Scottish reels, indeed the dancing style similar, great to have a good dance.  The celebrations were still going strong when we left at after 3am.

In-between Roma and the party I had friends from the valley over for dinner.  It was all a bit of a rush as there was a train strike on Friday and I was uncertain if I was going to get home at all.  Odd how every time I am in Rome I experience travel problems.  The strikers were kept company by a huge number of handsome carabiniere, seemingly almost as many as those standing looking bored outside the Banca d’Italia.  Anyway the train was running, and crept into Perugia only 15 minutes late, so a quick dash to do some food shopping and back home, let dogs out and cook a curry.  All four of us guys foreigners, happy to eat foreign food, and delighted to tuck into my chicken curry, not at all bad.

We finished up with  glasses of Williams pear grappa and scrumptious chocolate tozzetti that I had bought in a delightful pasticceria in Roma, and to gorge ourselves also an apple pie brought by one of the guys, really yummy!  Italy does have so much good about it!

Today rain all day, so a lazy cozy day in front of the fire.  Catching up on telephone calls to friends, soggy squelchy dog walk, and beginning to make lists for our BELLAUGELLO NEW YEAR’S EVE HOUSEPARTY – for which there are still some suites available –  For the full details and how to book scroll down on my blog  and to get your space BOOKED NOW!   or simply email: book@bellaugello.com

Oh! and by the way if any of your guys are looking for a personal portrait photographer, I can recommend Aldo, private message me and I will put you in contact.