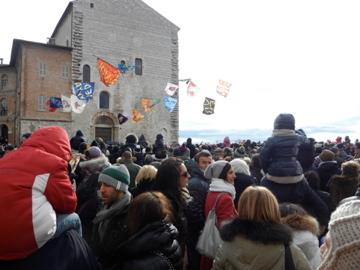 The 6th. of January in Italy is the feat of Befana, the Epifany and the day when the ugly old woman (I am told she is Santa Claus’s mrs) brings children sweets.  La Befana arrived in Gubbio in the Piazza Grande to a tumultuous applause from the kids and adults alike.  Abseiling from the castellated top of the Palazzo dei Consoli Befana arrived in the midst of a large crowd who had been watching a very athletic group of flag-throwers or Sbandieratori. La Befana is sponsored by the Vigili del Fuoco, (firemen to you anglophiles!) of Gubbio.

The celebrations mix old and new traditions in the spectacular setting of the medieval town.  Although not technically kids we made a special excursion the short distance from Bellaugello Gay Guest House to witness the occasion, I just love the festive traditions here in Italy, the enthusiasm, the costumes, the music, the colours, and the fact that the traditions are being passed on through the generations.

Afterwards we drove to the top of Monte Ingino, above the town, the views, bathed in January sunshine, were stunning (shame about the guy who got in the photo!)

and then to Bottaccione, one of my favourite restaurants where we feasted on wildly good home-made pasta.

No matter when you come to Umbria there is always something great to see or do.